Fox Star Studios is a motion picture production and distribution company from India. It is a wholly owned subsidiary of STAR India, part of the Walt Disney Direct-to-Consumer and International segment of The Walt Disney Company. 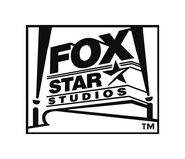 With the split of News Corp, the byline was removed.

The logo is based on the 2009 20th Century Fox logo's structure and animation.

With the split of News Corp, the Byline was removed.

Community content is available under CC-BY-SA unless otherwise noted.
Advertisement